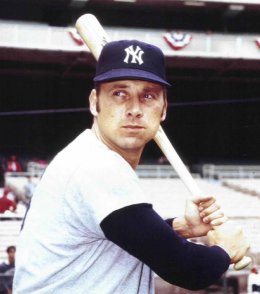 Tom Tresh, who burst onto the big-league scene
in 1962 and won Rookie of the Year honors as
a fill-in shortstop for the Yankees after Tony Kubek
was called into military service, died Wednesday at
his home in Venice, Fla., of a heart attack. He was
71.

The switch-hitting Tresh, who drew unfair
comparisons to Mickey Mantle that he could never
live up to after his standout first season in which he
hit .286 with 20 homers, 93 RBI and 94 runs scored,
was nevertheless a Yankee fixture in the waning years
of their five-decade dynasty. In three World Series,
1962-64, he hit .277 with four homers and 13 RBI in
18 games, including a two-run homer off Sandy
Koufax in the 1963 opener. In the 1962 Series against
the Giants, he hit a game-winning three-run homer in
Game 5 and in Game7, he made a great catch in left
field to rob Willie Mays of an extra-base hit to help
preserve the 1-0 clinching Yankee win.

"I got a call from his son, Greg (Wednesday)
morning who told me Tommy had passed away at
his home," said Johnny Blanchard, Tresh's Yankee
teammate in the '60s. "He'd played golf the day
before and complained about an ache in his back, but
I guess he didn't think it was serious. He played
a valuable role for those ballclubs of ours in the '60s
and was just a terrific fellow. This is a sad day."

When Kubek returned from the Army, Tresh moved
to left field, where he flanked Mantle and Roger
Maris in one of the best outfields the Yankees ever
had. In 1966 he hit a career high 27 homers and led
the American League in sacrifice flies. He also
switch-hit homers in the same game three times that
year. On June 6, 1965, Tresh hit four homers in
a doubleheader against the White Sox.

Tresh, whose father, Mike, was a catcher mainly with
the Chicago White Sox from 1938-48, saw his career
shortened after hurting his knee in spring training,
1967. Two years later, the Yankees traded him to the
Detroit Tigers for outfielder Ron Woods and he
retired after that season with a .245 average and 153
homers.

"Tommy was just a wonderful guy and a real plus
for us," said former Yankee second baseman Bobby
Richardson. "Filling in for Tony the way he did in
1962 was so important. We couldn't have won that
year without him. I always felt badly for him that he
was always being compared with Mickey, just
because he was a switch-hitting shortstop who moved
to the outfield."
---
1962 Topps (#31) baseball card (front):
Loading Image...

---
Tom Tresh Was Always Playing with a Full Deck

FROM: The New York Daily News ~
By Vic Ziegel

The Old-Timers' Day game at the Stadium was the
only time I'd see Tom Tresh. Shake his hand. Ask
how his McDonald's franchises were doing. But
when he was playing the outfield for the Yankees -
the year they won their last dynasty pennant, 1964,
and didn't win nearly enough the next bunch of years
- I saw him every baseball day.

He was one of the few Yankees willing to speak
the same language the sports writers did. Most of
the others weren't the chatty type, unless the
question was "What pitch did you hit for the
homer?"

Mickey had the most bad days (in the Q&A game),
and his teammates took their vows of silence from
him. Like all the other young Yankees, Tresh
worshipped Mantle. But he never turned his back
on us, or retreated to the trainer's room after
a dismal game, when he knew our questions wouldn't
be softballs.

I covered him for nearly six seasons, as his career
went steadily downhill.

He didn't change. Answered all the questions
- vanilla answers, but they got away with that back
then - and smiled if you came by to make small talk
before a game. Wasn't nearly as outrageous as
Joe Pepitone - when using a hair dryer passed for
outrageous - and didn't break us up the way Phil
Linz did. (When other subs were demanding trades,
Phil barked, "Play me or keep me.")

Tresh grew up in baseball clubhouses. His father,
Mike, a longtime catcher for the White Sox, died
during the 1966 season. That was the first year of
Tresh's disappointing stats. I can't say there was
a connection, but his numbers never improved.

When my editors called to tell me about Tresh's
death at the age of 71 Wednesday, they asked me
to include my best Tresh stories. Sorry, there are
none.

OK, one. Detroit, 1968. I'd like to think it was the
same trip Denny McLain intentionally grooved
a pitch that Mantle hit for his 535th, and next to
last, home run. (Grooved two, in fact. Mantle
fouled off the first one. The next batter, Pepitone,
reached the plate and indicated to McLain where
he wanted his first pitch. Denny decked him.)

Anyway, everybody was in a pretty relaxed mood.
There was no pennant race, and the Yankees were
finishing fifth. That night, several Yankees were at
the bar across the street from their hotel. Writers
were allowed.

Somebody suggested a game of Liar's Poker,
or dollar poker. The serial numbers on a dollar
bill determined your hand, or your bluff. The rules
get just a little complicated here, especially if
you're playing after 2 a.m. This night, though, the
game they played was nothing close to how
I earned my master's in bar math at the Lion's
Head. One of the Yanks, explaining the rules, said
if you didn't have a good enough hand, you could
say pass. And it went to the next player. And if he
said pass, it moved away from him and on to the
next player, etc, etc.

That made it too easy. Every time it came around
to me, I'd say pass. And it became the next guy's
problem. Since there were at least six or seven
players, the numbers got ridiculously high. I'd keep
passing. Finally, some poor chump would throw
down his bill in disgust - he obviously didn't have
enough of the right numbers - and pay up all
around.

Why didn't he just say pass? Beats me. After awhile
I noticed that Tresh and I were saying pass a whole
lot more than the others, and pulling in the most
dollars. I gave Tresh a look that was meant to say,
"What is wrong with these guys?" Tresh put
a finger to his lips. "Sssshhh," was his unspoken
message. "Don't louse up a good thing."

The next day, my pockets still stuffed with singles,
I went directly to Tresh's locker. He began laughing
before I said a word.
---
1964 Topps (#395) baseball card:
Loading Image...

Nick Cataldo
Reply
Permalink
Post by MWB
That's a great read.
GO RED SOX
Mark
Great story! Although i was a big Mantle fan, Tom Tresh was my absolute favorite Yankee growing up in the 60's. After all these years and the great players that have donned the pinstripes, Tommy is still my favorite Yankee.
Nick Cataldo